1925 - 2020
AAUW Bakersfield was founded Dec. 10, 1925, led by president Virginia Lilly French. Women college graduates met with members of the state branch at the Southern Hotel in the fall of 1925 to plan the new chapter.

On Sept. 26, 1925, The Bakersfield Californian reported on the meeting:

Gathering together yesterday afternoon in the parlors of the Southern hotel were 40 college and university women of Bakersfield interested in formation of a branch of the American Association of University Women.

Mrs. C. M. Vanderburg of Fresno, president of the California state branch, was present and called the meeting to order. After her opening remarks, she called upon Mrs. Frederick Faulkner of Oakland, chairman of the state membership committee, who spoke on the aims and work of the A.A.U.W.

Many Chapters
Mars. Faulkner said there are 300 or more branches in the United States with a membership of 20,000 ranging from 30 to 800 members for individual branches. California alone has 19 branches. Dr. Aurelia Henry Reinhardt of Mills College is the national president, now serving her second term.

A committee was formed to create the Bakersfield Branch:

At the conclusion of Mrs. Faulkner's talk a discussion took place as to the desirability or organizing a branch in Bakersfield and after securing the individual expression from those present, it being the unanimous opinion that there should be such an organization in the city, the following committee was appointed: Mesdames C. E. Teach, A. C. Dimon, A. S. Goode, Kenneth Lilly; Misses Harriet Buss, Lucie Altona, Ysabel Forker 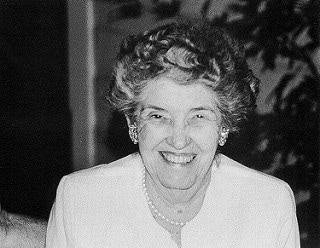 Marian Whitney Biggar, a founding member of the Bakersfield branch. She was a graduate of Wellesley College.

A branch of the Kern County Library is named for Eleanor Wilson, president of AAUW Bakersfield from 1943 to 1944. Learn more at Bakersfield Life.

Ysabel Forker was a founding member of AAUW Bakersfield and served as president from 1940 to 1941. A 1915 graduate of UC Berkeley, she taught Spanish at Bakersfield College. She was also a member of the Cal Alumni Association during the 1960s and was active in the California Republican Party. Learn more about her at Bakersfield Observed.